E liked this one especially

“Would you trust a professor who put this image in her teaching portfolio?” 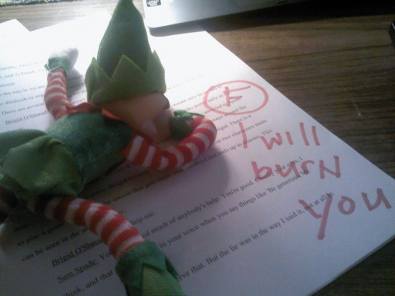 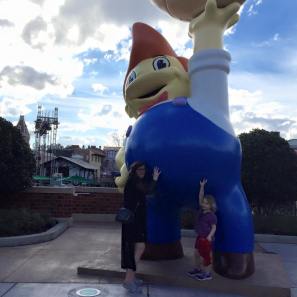 This is, title notwithstanding, about fun and laughter. We had so much fun. Elizabeth would sometimes say “I’ll pray for your soul, Mister” instead of goodbye, in the tone of a Puritan preacher. One of her favorite Homer Simpson lines was “Why can’t I watch ‘Honk if you’re horny in quiet dignity?” She enjoyed pictures or videos of kittens playing or chimps wearing clothing, and she liked praying pranks on people (more on that later) and I’m even a little nervous that she had some prank planned for today that she left elaborate instructions for one of you to carry out.

Mostly, Elizabeth found other people interesting and amusing and was a willing conspirator. She egged you on, and then you egged her on, and then things got out of control. A sign on a Florida company always intrigued her (“Badcock and More”—what more? She wanted to know) She loved how Laura had referred to Elizabeth’s dog, Buddy, an adorable little West highland terrier, as “that scummy little bastard.” There are many photos of her and Laura or her and other friends grabbing statues inappropriately: the Giant Bear statue at one of our local orchards, Lard Lad, even Balzac. She loved it when we went to Bellows Falls Vermont and called it “Fellow’s Balls” and it cracked her up that my brother called “Mount Monadnock” “Mount my Nads knock.”

I know, it’s not sophisticated humor, people. Please bear with me.

Laura wrote in the obituary that Elizabeth took “intense delight in small pleasures” and I cannot think of a truer statement. Saying that she loved life might be missing the point—she loved the stuff of life: the food, the stories, elegant robes and dark rooms and fuzzy creatures. One night we were watching that movie with the little animated dolls—Puppetmaster—on TV. I was bored and just kind of organizing things and I heard her shout “LOOK AT THAT CUTE LITTLE GUY” really loudly. I looked up and it was this horrifying little trench-coated creature with white hair holding some kind of knife. She was just delighted. It was fun to watch her watch that film.

She wanted everyone else to feel that same sense of joy and fascination that she did. Up in the Lakes Region of NH, where I lived for a long time, is the world’s biggest arcade. We always get the world’s biggest things once those things are no longer in style. We’re not Texas. But anyway, she loved this place, called Funspot, which had at its mascot a little green dragon with a baseball cap named Topsnuf (Funspot backward.) She even threw my husband and me a rehearsal dinner there the night before our wedding, complete with crafts for the kids and pistachio Macaroons from Mike’s pastry in the North End, and I don’t have to tell you that it was the best rehearsal dinner in the history of weddings. As Laura will tell you, she leaves behind an impressive collection of Funspot cups and plates.

Last fall I told her about this thing they were doing in my very small NH town, a town she liked because it reminded her of one of those puritanical rural towns in the old TV movies she liked, with ancestors of witches and blond twins who instead of speaking wrote runes on barns, and who had accidentally killed a playmate by pushing her down a well, one of those movies whose endings she always knew in the first four minutes of watching and would tell you. Anyway, the thing they were doing in my town is called a Trunk or Treat, and it was started in the south, I guess, so churches could put their own spin on Halloween and not make it too pagan or evil-seeming. You basically decorate your trunk with a theme of your own design and meet in a church or town hall parking lot so children don’t have to walk miles of rural road in the dark to get candy. Our theme was Pet Sematary. She was insistent that I (and my six-year-old daughter) stay true to the original Steven King novel and have a fake dead baby in our pet cemetery (we didn’t).  So, to get some ideas, we looked on my phone for inspiration and laughed so hard at so many of the church trunk or treats, mostly with weirdly perverted looking guys dressed in Halloween costumes luring children into their trunks. Probably, this is not funny, but you had to be there.

Her humor was irreverent and on point. If she were sitting next to you at a memorial service, she would make a joke. It might reference the chuckles the clown episode of Mary Tyler Moore, or it might be to ask if the man speaking was wearing regular pants or capri pants. Someone might do or say something that reminded her of Lee Marvin or some obscure Italian film score or this book she had about strange deaths in turn-of-the-century Wisconsin. You just never knew, and that was part of the fun. The thing is, she was never mean. The question about the capri pants would never be said with snark but with curiosity, as though there was maybe something subversive or weirdly sexy or smart about this guy possibly wearing capri pants, and that the person was more interesting because of it. And I can tell you, if you were around her enough, you started seeing it, too.

And now I always see people in this way, and it is a gift, and Elizabeth loved nothing more giving gifts, except maybe getting gifts.

And I don’t have to tell you how amazing it was for me, a girl who grew up changing schools all the time and getting picked on, and who felt always out of place as a Catholic-educated Boston-area transplant in the middle of the Midwest to have a friend like that. Even for what ended up to be an unbelievably short time.

I’m not a religious person, but here is what I feel in my bones—she is not gone. She is still with me every day, making funny comments about the things I do at work and the people I talk to, leaving books for me to read and shows for me to watch and liking my Facebook posts.

So here is what I leave you with:

The last time I got up and made a speech about Elizabeth, she was wearing a green satin dress that matched her eyes and I got to talk about her and Chris. They had so many adventures together, and like all marriages between equals, they were fun to watch, like a goofier, an equally drunk but more intellectual version of Martha and George in Who’s Afraid of Virginia Woolf . And they were just really fun to watch together, and I will miss not just Elizabeth, but Elizabeth and Chris together. I will end with their own words. When I moved back to NH and she was still in Illinois, we kept in touch on social media, as people do. Well, one day she wrote me this:

Finally, I found my ventriloquist dummy online! He’s vintage from the 70s, kind of scraggly, a misfit toy if there ever was one. Betty would understand. I ‘ve seen him all year and have been waiting for him to go on sale, but I’m afraid the Annabelle movie might make creepy dolls more marketable. All told, he’s still cheaper than any other ventriloquist doll sold online even with shipping, so I’m sure you’ll agree it was a prudent purchase. My evil plan is to wrap him up in elaborate paper to give myself for Christmas (from Rinaldo the elf) and “I’ll put out the gift in early November. I’ll just leave it there and it will make Chris crazy! Ha ha ha because I’ll refuse to open it until Christmas. You’ve got to promise not to tell him.

Maybe I should call him Lil’ Chris.

I feel bad for leaving him in his box for months when I could be having fun learning ventriloquism and freaking people out.

His name will be Leroy.

Leroy came last Thursday. I couldn’t bear to leave him in the box for so many months. So he’s just been hanging out in my office. Chris has yet to notice or he’s trying to mess with me by not commenting on him. I think I’ll just leave him in my room until Chris says something. If he’s messing with me, he’ll find out that I can go for a long time without breaking.

I want to do a portrait of me and Leroy but I’ll need Chris to notice him first. I can’t believe him and I don’t think he’s diabolical enough to be screwing with me.

I am working on a picture of Leroy and I (in a peignoir set) with a glass of wine. Something real classy. He is really cute, although his eyes don’t move so he always seems a little wall-eyed.

Do you think I should start a blog on various cultural questions?

I really may do it. I have a lot to say.

Chris: So, um, Elizabeth Hatmaker bought a ventriloquist dummy, Leroy, who is now haunting our home. She places him in strategically freaky places around the house.) Supposedly her best friend, Kirsti Sandy, and her sister, Laura Hatmaker, have been in on this “gag” for weeks. Advice? Interventions? What should I do (HELP ME)

Elizabeth: Poor Leroy. I’ve been letting him help me hand out candy to the children. After the last bunch of kids came by, I realized his pants had fallen down. This probably won’t help his reputation in the neighborhood.

2 thoughts on “Remarks on the Untimely Death of my Best Friend, on a Snowy March Day, in a Doomed World”